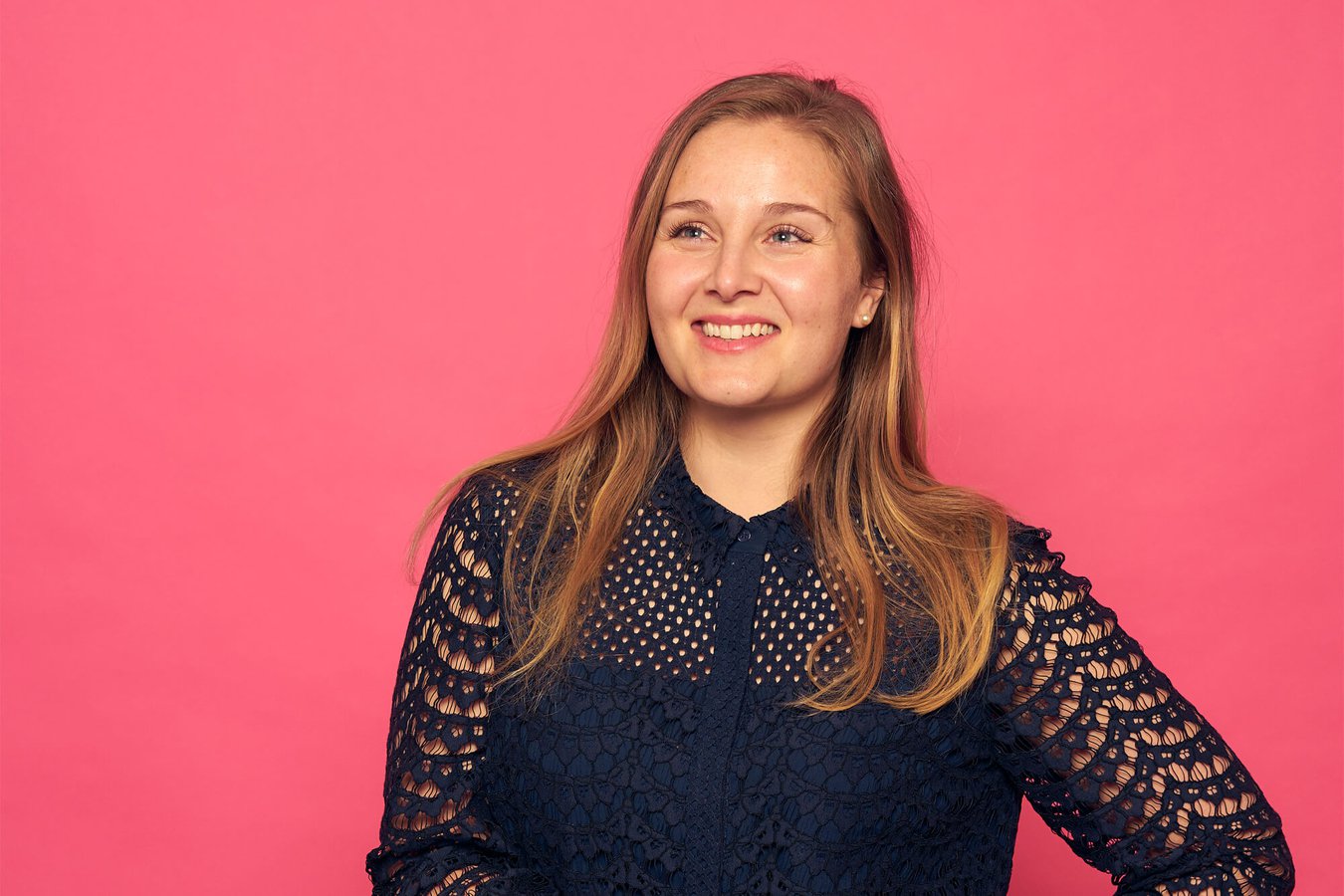 This is the first article in a series of 3 to be published over coming weeks, sharing my thoughts on how we can make the concept of ‘Employee Experience’ something that has meaning and value. If you’ve been thinking that it seems like it’s just a new wrapper on the same old ‘employee engagement chocolate bar,’ these are the articles for you!

It’s a sentiment I’ve heard a number of times over the last year from professionals working in the People & Culture / HR space. I love the intent behind these assertions – evolution of thought, a desired focus on employee outcomes, achieving success through people. However as I then heard about the variety of exciting P&C-led EX initiatives that they had planned for the next 12 months, I was left with the sense that the assumed ‘path to a great EX’ looked very much like the paths P&C have travelled over the past couple of decades, with varying success.

A year ago our company launched the inaugural Humankind Employee Experience Awards programme. We were privileged to learn lots about what great employee experience looks like, with my favourite being simply that those who commit to following through on their intent to create a great EX greatly increase their chances of success! Less expected, though, was the realisation that our own approach to understanding and designing for EX needed to change. It added little value over what had been done before.

The problem with the most common models of EX

If you consider yourself a student of EX, you might be familiar with the work of Jacob Morgan, who has identified that any employee’s experience is influenced by their organisation’s technological environment, cultural environment, and physical environment. It makes sense, and last year we were using our own model of EX that was similar (see below). 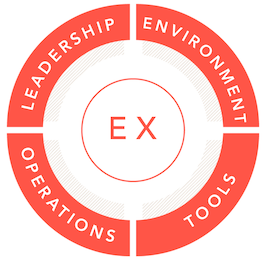 This model did a good job of helping us structure our EX discovery work for clients, but we found that once an insight was presented in a report then the model was of little ongoing use. This failure, and the fact that the model didn’t actually encourage any change in approach for P&C in designing for EX, nagged away at us.

Then we had a realisation: Our old model of EX was primarily focused on inputs (areas you can influence). EX was positioned as a simple outcome of this focus. This resulted in encouraging leaders and P&C teams to simply build a list of ‘things to work on,’ assuming that EX will improve as a result.

Once you raise your expectations that a model of EX should help you design great experiences, an inputs-based model becomes inadequate. After a period of research and reflection, we have developed a unique model that we feel meets these needs. Humankind’s PREP for EX model describes 4 types of employee experiences, across the dimensions of Purpose, Relationships, Enablement, and Performance. You may note that it covers similar ground as an inputs-based model, but from the perspective of the employee. 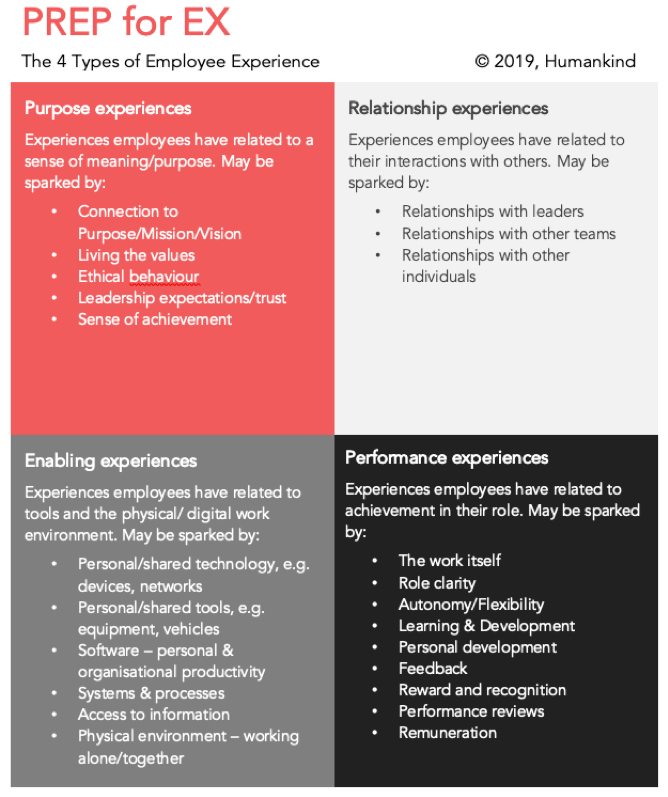 Not only can we run a discovery process for an organisation that investigates ‘what it is like to work here,’ but this model also describes what a great experience looks like, so you can design for it. An example helps, so let’s take the onboarding process as it’s well-known to provide some of the first ‘moments of truth’ for a new employee. While an inputs-based model of EX might identify onboarding as a ‘Culture’ opportunity area, PREP for EX has suggestions for both your inquiry and process design: 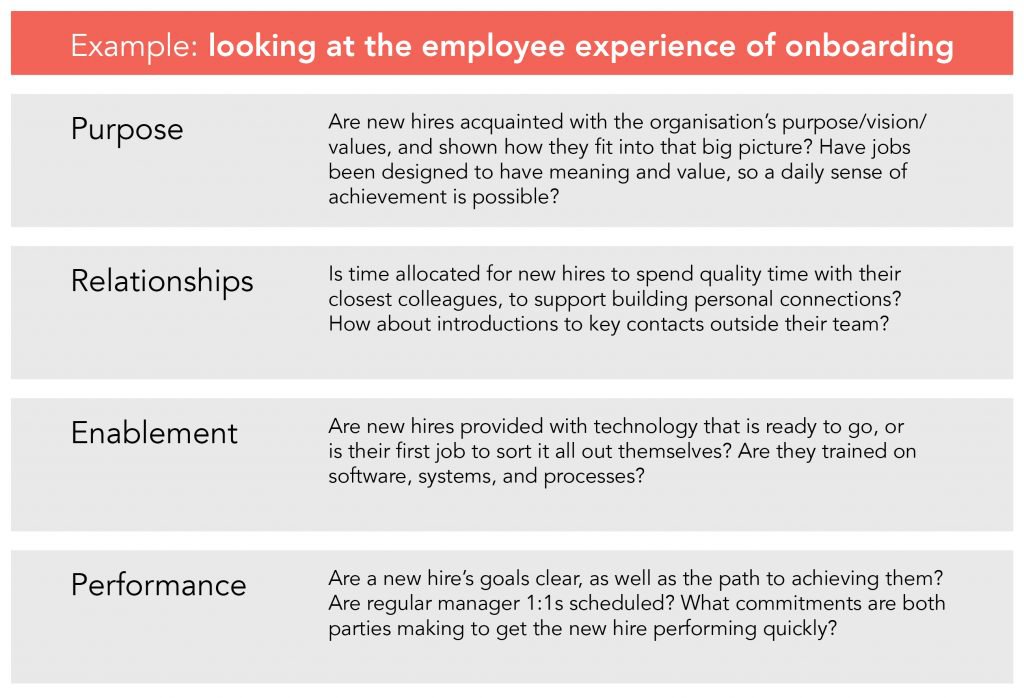 We have found the PREP for EX model provides practical guidance to organisations looking to understand what’s driving their EX and how to improve it.

Feeling much more comfortable with our model, our attention then turned to how organisations go about improving the employee experience. In the second article in this series I’ll discuss the downsides of ‘HR Best Practice,’ and what ‘Employee Centered Design’ is all about.

Supporting our teams to thrive as the office reopens

It’s been two months of adrenaline. Keeping our organisations going and supporting our teams to stay safe have been important and heavy loads for leaders to carry.

COVID-19 has brought with it a huge amount of upheaval for businesses. Many have had to slow down, stop or change in response to the lockdown and the current economic environment.

Now that we are two weeks into lockdown, it's likely we've all established a rhythm or routine that works for us. Before we get too comfortable, it could be a great time to iterate or bring in new ideas that will enhance the lockdown experience even further.